The day started the way all her days started. She woke up to a brightly lit room, unsure whether the lights had woken her or whether she’d woken on her own. She rolled her little joints about, listening to them pop as she stretched and then pulled herself out of bed. As Amaya began her routine in the bathroom, she noticed with a dim satisfaction that she wasn’t still tired today. It was always nice to wake up feeling… Awake. There was one difference though, her clothing had been left on the ground by her bed. Laundry still wasn’t something she did herself, even though it was covered in the plumbing book. The soap never appeared in her room and she couldn’t reach the dials even if it had.

Around dinner time she started feeling strange. Not sick (she couldn’t remember the last time she was sick) but strange. Like there was something watching her, like it was a bit colder maybe, or… She just couldn’t put her finger on it, so she did her best to ignore it. She read her plumbing book again, and some of the other recipes too, she worked on her stories in a brand new notebook (she’d gone through a couple) and she tried not to jump when the fridge’s compressor made noises or she thought she maybe saw something out the corner of her eyes. Well steeled against the games her mind was playing on her, she didn’t notice her levitating shelf until it thumped back onto the ground, bashing against the walls as it did. 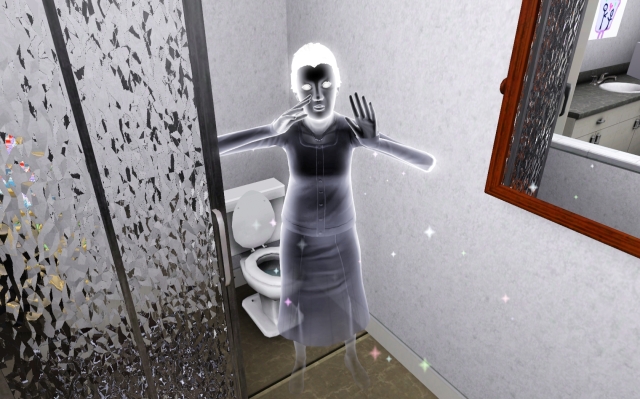 Amaya jumped from the couch in a split second, whirling around the room until she saw a translucent figure standing by her shower, waving and smiling kindly.
“Hi there! No, oh no… Don’t be scared dear. Oh you’re quivering, poor thing. Don’t worry, I won’t hurt you. Can’t hurt you, really. Oh my, it is nice and tidy in here. I think I had this wallpaper in my first house too. I suppose this isn’t your first house though, is it?” The first voice she’d heard in years and it was coming from… A lady? A ghost she guessed. The voice started out excited, then distracted and then just sad, but there was something reassuring in her tone, so Amaya approached her tentatively. 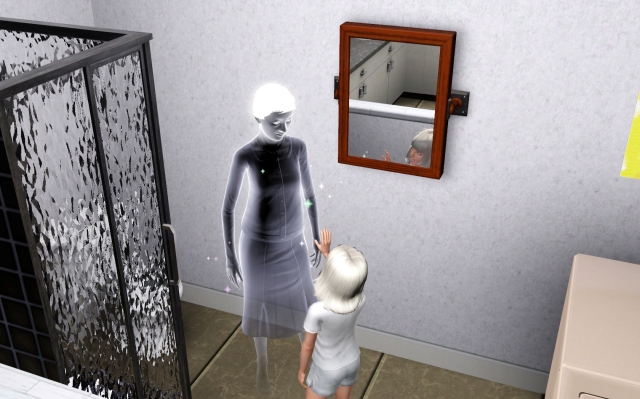 “H-” she cleared her throat “H-hi?” Maybe she was going crazy?
“Hello.” A soft smile.
“Are you… real?”
“That’s a wonderful question. I am, but I’m not. I was, once, but now… Well, I’m here, aren’t I?”
Without warning, Amaya reached out to the apparition but her hand slipped right through the woman’s arm. “You’re a ghost.” She couldn’t stop the disappointment the seeped into her tone. A ghost couldn’t get her out of here.

“Well, yes, I suppose I am…” The ghost cast her hollow gaze around the room and frowned, reading the girl’s thoughts on her face “I don’t suppose that helps you much, does it?”
“Nope, not unless you can make me invisible like you.”
The ghost chortled “Can’t you see me, dear? I’m not invisible at all…” her voice dropped ’til it was almost inaudible, the pained tone too low for Amaya to pick up “… to you.”
“I can. I’m Amaya, Amaya Sowl. I was put here by Them and I want to go home.”
“I’m Lily, and I very much wish I could take you home.” 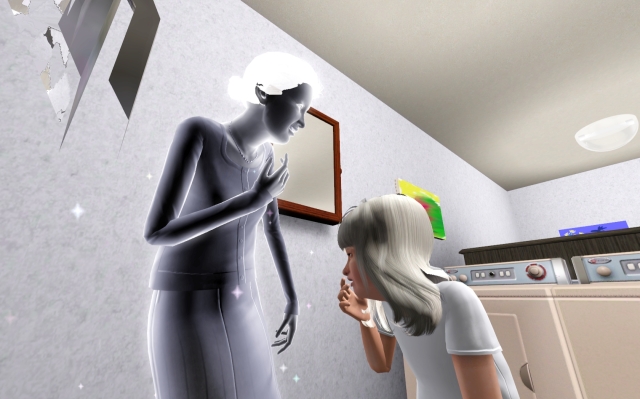 For the next half hour, Lily and Amaya chatted and giggled in the bathroom, both of them relieved to finally be seen and heard. Amaya told Lily her stories, and Lily told Amaya a similar story, of Sims in space. It didn’t matter what they spoke of, they were both thrilled to be exercising their vocal chords – to be communicating and understanding, even if neither could understand why. No one else had seen Lily for the decades she’d been a ghost, why could this poor little girl, locked away from the world? Why this girl, and not her great-grandson? 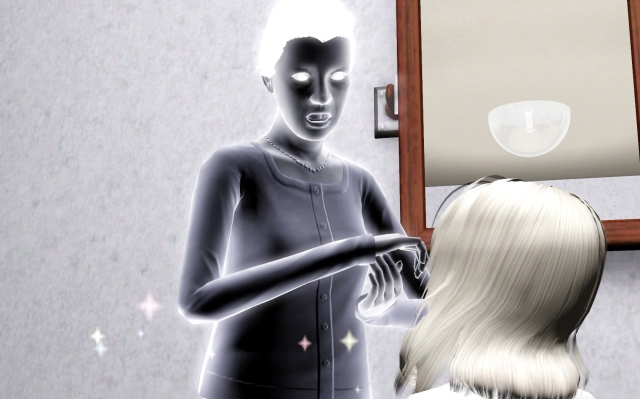 All of a sudden, midway through a joke, Lily froze, her face a mask of pity and regret.
“Dear, I have to go now. I don’t really understand why and I don’t think I’ll be back. It has been an absolute pleasure to meet you and I hope… I hope so much for you. Now, the next few minutes will be very strange for you, you need to trust me on this and don’t worry. You have enough time to worry” she paused, and eyed Amaya carefully “and I think you’ll do a lot of it. You remind me much of myself. What happens next will feel strange, but it’s natural and perfectly safe. You will be OK. I’m sorry you are here Amaya, and I’m sorry I can’t help your. Just remember one thing: The stove is n-”

Without any flash or bang or fanfare, Lily disappeared, leaving half a sentence about stoves hanging in the air. “COME BACK!” Amaya pleaded into the empty room, but even still she knew it would do no good. The funny feeling that must have been Lily had left as quickly as her new friend had. Amaya was alone again. There was no time to feel sad, only time to feel odd, the way Lily had promised. Her limbs and bones felt all woobly and 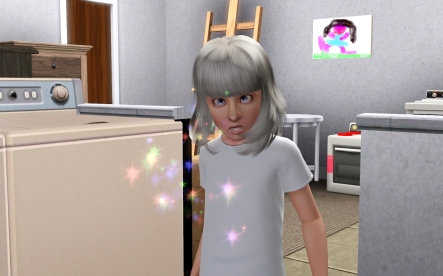 sparkles of colour were beginning to dance in front of her eyes. She could feel her skin and hair and muscles and they were all stretching incredibly quickly, tearing her body around from one side to another as she changed size and shape.

And then she was a new Amaya, but still all alone in a cramped box of a room.

Pages: 1 2 3 4 5
This entry was posted in Uncategorized. Bookmark the permalink.

9 Responses to Interlude – Locked Away p.1